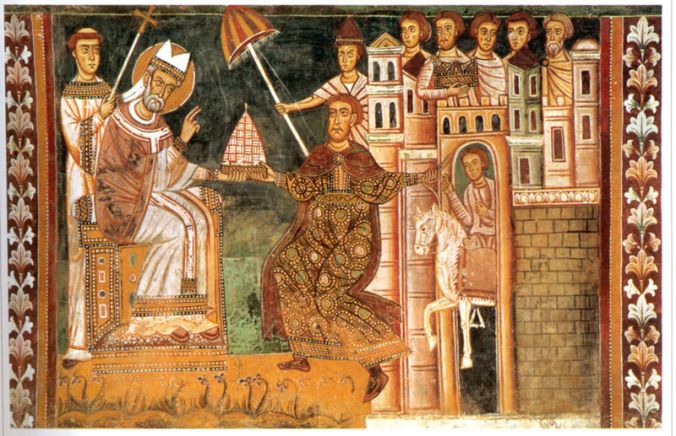 The texts for dedication of a Church are full of references to Jerusalem, the “city of peace”. The peace of Jerusalem is a reflection of the glory of the Lord who thrones above the Cherubim in her temple. Thus love of Jerusalem is love of the Lord: “Pray for the peace of Jerusalem…Peace be within your walls, and security within your towers…For the sake of the house of the LORD our God, I will seek your good.” (Ps 121/122) All the nations of the earth are destined to come to Jerusalem to offer gifts (cf. Ps 67/68), thus her peace is to fill the earth.

But when our Lord is born in Bethlehem it is another city to whom the nations of the world make pilgrimage, another city who has spread her peace throughout the world. Rome had her own tradition of messianic destiny. The Greeks had (more or less) a cyclical view of history, but Rome has a linear view: history is the unfolding of the destiny of Rome, who is to rule over all the world. Significantly our Lord is born during the reign of Augustus, who will be given divine honors for his role in bringing Rome toward her destiny. The true Prince of Peace is born “while the whole world was at peace” on account of the deeds of the false god Augustus. Christ is to be Victor over the false god Augustus, but through his church he will assimilate all that was good in Rome, all that His providence had put there as preparation for His coming. Thus it is at Caesarea that Christ gives Peter his mission.

Pope Benedict notes that the Acts of the Apostles is the story of the journey of the Gospel from Jerusalem to Rome:

[The Church is one, holy, catholic, apostolic, and missionary.] This reality, which we can verify in every epoch, is already anticipated in the Book of Acts, where the Gospel passage from the Hebrews to the pagans, from Jerusalem to Rome, is described. Rome represents the pagan world, and hence, all people who are outside of the ancient People of God. Actually, Acts concludes with the arrival of the Gospel to Rome. It can be said, then, that Rome is the concrete name of catholicity and missionary spirit, it expresses fidelity to the origins, to the Church of all times, to a Church that speaks all languages and extends herself to all cultures. (Regina Caeli, Pentecost 2007 (via Rorate))

The Apostles shed their blood in Rome, but their blood became the seed of the conversion of the whole city and all that was great in it. And the symbol of all this is the dedication of the Lateran Basilica to ‘Christ the Savior’.

While we hope for the final peace of the heavenly Jerusalem we are at war. The Church on earth is Roman, She is militant. The daily combat combat waged in our souls against the false gods of this world is more than a merely individual struggle; it is one battlefield of a great war that is to spread the new pax romana throughout the world. It is sweet and noble to fight and suffer for such a City!