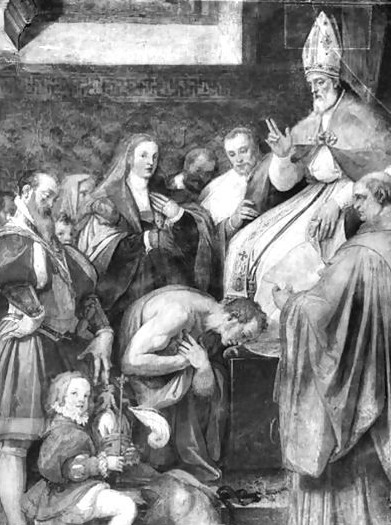 Aelianus of Laodicea has posted a reply to my post on the anointing at Bethany that I think merits an extended response. He writes:

The Holy Father’s moderation of the papal liturgy along with his comments about the desired poverty of the Church seem to imply that he feels there is a relationship between the splendour of the liturgy and the provision the Church makes for the poor. Presumably some people feel this is an unfair suggestion and that the faithful have more than enough resources to provide for the poor and for the worthy service of the altar. Presumably they also feel that the implied relationship is a distraction from the inadequacy of the provision made for either. Furthermore, while the faithful may indeed neglect the poor materially, the essence of the problem lies in the principle upon which wealth is acquired not the mere quantity or distribution. Here perhaps the true negligence lies in the coyness of the holders of the teaching office in proposing the divinely revealed truth concerning the true function of money. In this (as in other matters) there have been shepherds, who have not, as becomes Apostolic authority, extinguished the flame of heretical teaching in its first beginning, but fostered it by their negligence.

This in turn underlines the fact that the prudential judgements of Popes about liturgical style or when and how much to teach are not guaranteed by God and that it is not the role of the faithful to imitate the apologists of the late USSR in frantically discerning why the Pope is necessarily right in every such prudential judgement. One only has to apply this prudential infallibility idea to previous centuries to see its absurdity. The faithful do not need to be guided and ruled by the Vicar of Christ, the authentic guardian of tradition (whether Benedict XVI, John XII, Celestine V, Boniface VIII or Francis) in their choice of footwear or transportation, liturgical composers, prose style or missionary strategy. When, however, in the exercise of his office as shepherd and teacher of all Christians, in virtue of his supreme apostolic authority, he defines a doctrine concerning faith or morals to be held by the whole Church, he undoubtedly possesses, by the divine assistance promised to him in blessed Peter, that infallibility which the divine Redeemer willed his Church to enjoy in defining doctrine concerning faith or morals.

I have never denied that one can have legitimate disagreements with the Holy Father on prudential matters. In fact in a previous post I expressed my own disagreement with his liturgical minimalism, and unease at his apparent Gallicanism. Aelianus is surely right that our attitude toward the Holy Father should not be that of Soviet apparatchiki toward Stalin. But neither should it be the attitude of the citizens of liberal democracies toward their leaders — an attitude of habitual mistrust and scorn. It should be the attitude of a pious son toward his father, of a loyal subject toward his legitimate ruler.

It is vital not to regard our Holy Father with habitual suspicion, but rather to regard him with filial trust and docility, to try to learn all we can from his teaching, to be guided by his rule, and to voice legitimate criticism only with the utmost reverence and discretion.

Aelianus suggests that one is only obligated to be guided by the Holy Father when he infallibly defines doctrine. This is a popular position among theologians who would like to be able to dissent from every papal teaching save the definitions of the Immaculate Conception and the Assumption,  but it is false. The Church requires religious submission of will and intellect not only to the extraordinary magisterium but also to the ordinary magisterium. On Aelianus’s account what would be the point of the ordinary magisterium? What authority would be left to all the other bishops in Christendom, who who cannot teach infallibly? Moreover, the Pope and the other bishops (in their own dioceses) are not merely teachers; they are also rulers. Not only lawgivers and judges, but also executives. That is, it is their office to make prudential decisions which guide the rest of us.

A great example of the proper disposition toward the pope is Bl. John Henry Newman’s attitude toward Bl. Pius IX. It is no secret that Newman thought Pio Nono very imprudent and suffered much from what he saw as the Holy Father’s bad policies. But he mostly voiced his opposition in confidential correspondence with people who could actually do something about it: officials of the Roman Curia, bishops and so on. The magnificent sermon on Bl. Pius IX that I have been excerpting on my blog is a wonderful testimony to the supernatural attitude which he preserved toward the Holy Father, and above all tried to instill in the faithful. Newman was an implacable foe of “popolatry” and even of legitimate ultramontanism, but he is a luminous example of proper reverence toward the Vicar of Christ. Newman teaches that in even in prudential matters it is safest to submit to the Vicar of Christ: “His yoke is the yoke of Christ, he has the responsibility of his own acts, not we; and to his Lord must he render account, not to us. Even in secular matters it is ever safe to be on his side, dangerous to be on the side of his enemies.”

There are two things that are vitally important in understanding to what extent and in what way we are free to criticize the Pope and other bishops: the first is the reverence that we owe them due to their office, and the second is the modesty and caution with which we should regard our own very fallible opinions.

On the first point: how does a good son regard his father and loyal subject his ruler? Certainly not the way the traditionalist bloggers that I attacked regard the Holy Father. To compare the Holy Father’s concern for the poor with that of Judas Iscariot, and therefore to imply that it is hypocritical (“he said this not because he cared anything about the poor but because he was a thief”) is pure poisonous malice. (The fact that they use a passage of scripture that the Fathers interpret in a virtually opposite sense makes their attacks also ridiculous). One wonders whether they would publishing such violent attacks on their own natural fathers. If reverence and love is due to one’s natural father, who has only given one bodily life, how much more so toward one’s Fathers in the order of supernatural life? St Catherine of Siena, who certainly had her prudential disagreements with the popes, writes:

Know that the son is never in the right against the father, even if the father is ever so evil and unjust, for so great is the good which he has received from the father, that is, life itself, that he can never repay him for it. And we have received the life of grace from the Church, which is so great a benefit, that we can never, by any kind of homage or gratitude, pay the debt we owe.

Surely she is not merely speaking of submitting to the extraordinary magisterium when she writes: “Even if the Pope were Satan incarnate, we ought not to raise up our heads against him, but calmly lie down to rest on his bosom.”

On the second point we should express our disagreements with the Holy Father on prudential matters with great hesitation and discretion for the simple reason that our prudential judgements might very well be wrong. Supreme confidence in one’s own opinion might be justified if one is St Catherine of Siena or St Catherine of Genoa (and yet mark with what reverence and humility they address themselves to popes), but it is certainly not justified in the likes of us, whose intellects are darkened by sensuality, wrath and a host of other vices. The modesty with which one expresses legitimate disagreements ought to spring from a realistic sense of the fact that the Holy Father, a man of evident purity of heart, endowed with the graces of his high office, is much less likely to be mistaken than am I. Overconfidence in ones own private opinion is a sure mark of pride–the root of ever heresy. Let us rather have that modesty about our own opinions as to what is best for the interests of the Church demonstrated by Newman in a meditation for Good Friday, with which I conclude:

[We] are in no doubt or trouble whatever, we have not a shadow of misgiving as to the permanence and the spiritual well-being either of Thy Church itself or of its rulers. Nor do we know what is best for Thy Church, and for the interests of the Catholic faith, and for the Pope, or the bishops throughout the world at this time. We leave the event entirely to Thee; we do so without any anxiety, knowing that everything must turn to the prosperity of Thy ransomed possession, even though things may look threatening for a season.