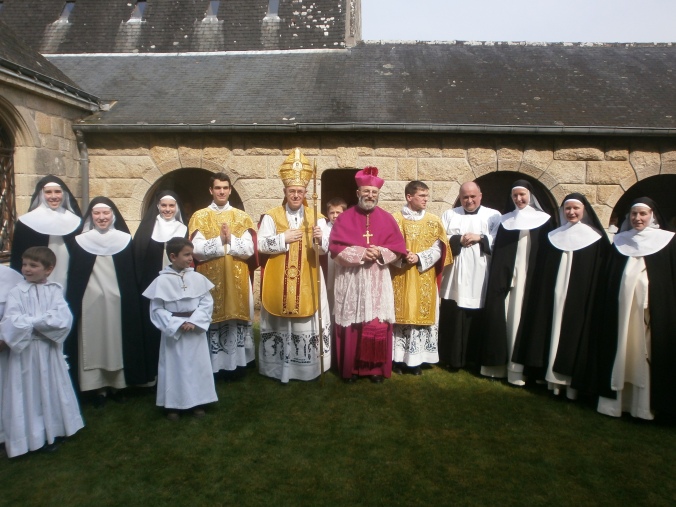 An acquaintance of mine from southern Austria is a postulant with the „Dominicaines du Saint-Esprit“ an “Ecclesia Dei” community of Dominican sisters, who teach in schools. She sent me some pictures of the solemn profession of some sisters. The the auxiliary bishop of Astana, Kazakhstan Msgr. Athanasius Schneider, O.R.C. celebrated the Mass of Profession. Among the sisters professing vows were two Austrians — Mère Marie Barbara and Mère Maria Lucia. There is a long tradition of Austrians going to France in search of a particularly fervant religious life– Bl. Otto of Freising the son of St Leopold of Austria, for instance, went to Morimond Abbey. What is it with France and religious communities? Even in these days there is an extraordinary flourishing of various communities that have returned to the sources of religious life.

The history of France is so frustrating because France has such authentic greatness, and corruptio optimi pessima. As Thomas Merton remarks in The Seven Storey Mountain.

And yet it was France that grew the finest flowers of delicacy and grace and intelligence and wit and understanding and proportion and taste. Even the countryside, even the landscape of France, whether in the low hills and lush meadows and apple orchards of Normandy or in the sharp and arid and vivid outline of the mountains of Provence, or in the vast, rolling red vineyards of Languedoc, seems to have been made full of a special perfection, as a setting for the best of the cathedrals, the most interesting towns, the most fervent monasteries, and the greatest universities.
But the wonderful thing about France is how all her perfections harmonize so fully together. She has possessed all the skills, from cooking to logic and theology, from bridge-building to contemplation, from vine-growing to sculpture, from cattle-breeding to prayer: and possessed them more perfectly, separately and together, than any other nation. Why is it that the songs of the little French children are more graceful, their speech more intelligent and sober, their eyes calmer and more profound than those of the children of other nations? Who can explain these things?