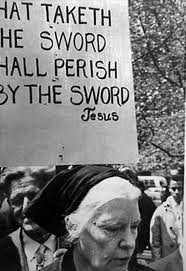 I recently read Dorothy Day’s memoir The Long Loneliness for the fist time; it was very beautiful and moving, but also challenging. Beautiful and moving because Day is such a lovable, good person, who truly tried to live the Gospel. But challenging because Day was an anarchist-distributist, committed to an egalitarian-emancipatory idea of justice, and a pacifist; while I am an authoritarian-corporatist, committed to an hierarchical-aristocratic view of justice, and an account of the transcendence of the common good that justifies war under certain conditions. What makes Dorothy Day’s positions so challenging is that they are so clearly rooted in her own experience concrete experience of poverty and injustice, and of the power of the Gospel. My own thinking on political and economic matters is very abstract and based mostly on book-learning a fellow blogger reminds me from time to time.

The notional and abstract must of course always be rooted in the real and concrete; the danger of unmooring it and creating a “system” independent of reality is grave. But on the other hand, the notional also makes more precise and distinct what is known confusedly in concretion.

Some persons think that Dorothy Day was “too radical”– by which they seem to mean that she was too condemning of industrial capitalism– by my difficulty with her is virtually the opposite–that she was not radical enough. I think her condemnation of the evils of capitalism was spot on, but that her conception of the alternative was too much of a piece with the whole ideological structure of modernity that helped bring capitalism about.

One of the most magnificent things about Day is deeply felt sense of solidarity. She writes of her thoughts as she lay in a prison cell long before her conversion:

It was this sense of solidarity that lead her eventually into the Church:

It was the Irish of New England, the Italians, the Hungarians, the Lithuanians, the Poles, it was the great mass of the poor, the workers who were the Catholics in this country, and this fact in itself drew me to the church.

It was this deep felt sense of solidarity that made the made Day so sympathetic to the egalitarian ideology of the left. Unfortunately this colors even her reading of scripture. She loves to say “call no man master, for ye are all brothers,” but unfortunately the only way of realizing this that she can she is through liberty and equality and anarchy. My difficulty with this is that there are a great many other passages of scripture which show that solidarity is based in the participation in the great common good of peace, and this presupposes distinction of rank.

On her Catholic Worker farming communes Day tried to realize her conception of anarchical fraternity, this caused some rather predictable problems:

William Gauchat who headed the house of hospitality, furnished an apartment for single women in need, and a married couple arriving ﬁrst, were sheltered there. But when Bill wanted to put a few single women into the empty bedrooms, the couple announced that they had possession and refused to allow them entrance. Our guests know that we will not call upon the police to evict them, that we are trying to follow the dear Lord’s teach- ings, “If anyone take your coat, let go your cloak also to him. . . . Give to him that asks of you and from him that would borrow, turn not away. You have heard that it has been said, you shall love your neighbor and hate your enemy. But I say to you, love your enemies, do good to them that hate you, and pray for them that persecute and calumniate you, that you may be the children of your father who is in heaven who makes his sun to rise upon the good and the bad and rains upon the just and the unjust.” When another family came to Maryfarm, we explained that we were trying to open a retreat house and that we did not have room for them. It was the family of one of our own willful leaders who “loved God and did as he pleased.” He did not wish to remain on a farm belonging to his father, where he was forced to work too hard. He and his wife refused to listen and unpacked their things to stay with us. First they took over the lower farmhouse. After a few conﬂicts due to their possessing themselves of retreat house goods (as common goods) they moved to the upper farm to join Victor. For the following year they continued their guerrilla tactics from the upper farm, coming down to make raids on the retreat house food and furnishings, explaining to retreatants that they were true Catholic Workers and that the retreat house was a perversion of the movement. (261-262)

It is not hard to guess what St Paul would have have to say about that. “Non est dissensionis Deus, sed pacis.” It is hard to square St Paul with egalitarian anarchism:

Slaves, be obedient to those who are your earthly masters, with fear and trembling, in singleness of heart, as to Christ; not in the way of eye-service, as men-pleasers, but as servants of Christ, doing the will of God from the heart, rendering service with a good will as to the Lord and not to men… (Eph 6:5-7)

It seems to me that the problem here is that Day’s thinking was too concrete: she considered merely the evil and unjust form of servitude that she found in the economic system of her time and did not consider its essence in abstraction.

The same I think can be said of her pacifism. One can apply to her what Belloc (one of her favorite authors) says of his own pacifist friends:

[When] a man says that war is wrong, he is saying something which, as it stands, is manifestly nonesense. But if we expand the phrase it has full and definite meaning. He means “for one organised community to attempt destruction and physical pain upon the organization of another such community with the object of gain or increase of power is wrong.” And so it undoubtedly is. (The Cruise of the Nona, p. 110)

3 thoughts on “The Challenge of Dorothy Day”