Yesterday was the Feast of the Assumption, the patronal feast of all Cistercian churches. Three of my confrères took final vows, and one monk from another abbey transferred his vows to Heiligenkreuz. The Bishop of Regensburg happening to be here, he celebrated Mass, with our Abbot of course receiving the vows. 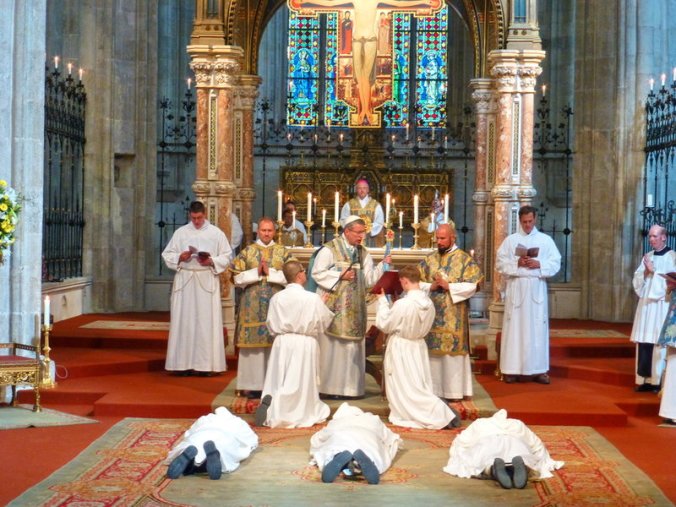 The ceremony for solemn vows follows more or less the outline described by St Benedict in the Rule, and is marked by St Benedict’s Roman sobriety. After the gospel the candidates prostrate themselves before the Abbot, who asks: Quid pétitis? They respond Misericórdiam Dei et Ordinis. The abbot then tells them to arise and preaches a sermon, sitting on the faldstool with the candidates standing in front of him. Then comes the feudal “homagium,” in which the candidates lay their hands in the abbot’s and promise him and his successors obedience according to the Rule of St Benedict “usque ad mortem.” Then every one kneels down and the Veni Creator Spiritus is sung. Then come the actual vows. The candidates read out the vows of stability, conversion of morals and obedience, which they have written by hand on parchment. They then sign the vow charts on the altar. The charts remain on the altar and are offered to God together with the gifts of the Mass. After signing the vows they sing Súscipe me, Dómine, secúndum elóquium tuum et vívam; † et non confúndas me ab exspectatióne mea three times. They then kneel down in front of each and every monk in the community, saying Ora pro me Pater, to which the monks reply Dóminus custódiat intróitum tuum et éxitum tuum. While this is going on cantors sing the Miserere. Then the newly professed monks are then blessed with an extraordinary three part prayer, addressed to each of the Persons of the Blessed Trinity in turn. They are then clothed in the cowl and the Mass proceeds.

4 thoughts on “Solemn Vows in Heiligenkreuz”