A member recieves the “band” symbolizing the bond of brotherhood 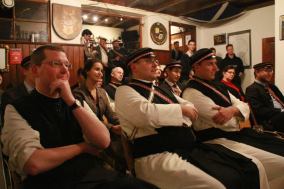 Listening to a debate with an atheist 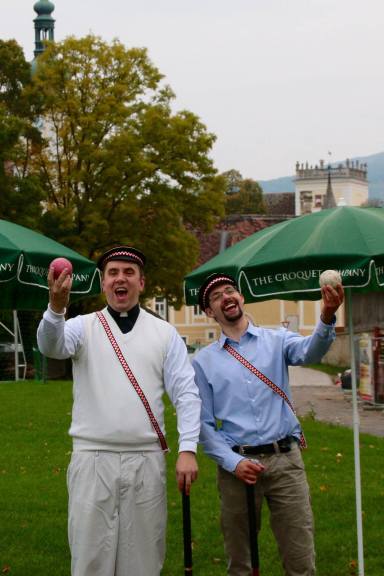 After a croquet match 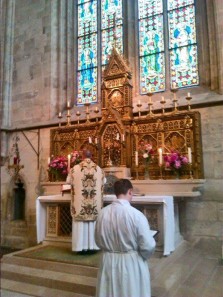 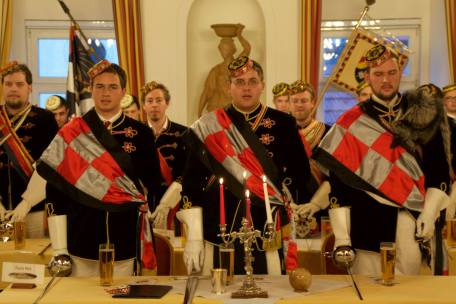 Listening to a lecture with guests 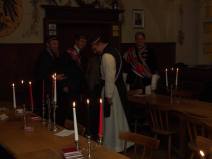 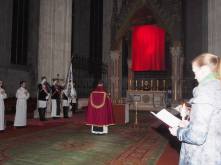 Venerating the relics of Bl. Otto of Freising

Consecration of the Studentenverbindung to Our Lady

At the Feast of St Liborius in Paderborn, Germany

Student fraternities called Studentenverbindungen, with their elaborate ceremonies involving the drinking of beer, the singing of 19th century patriotic songs, and the wearing of colorful uniforms, have long been features of German university life.  Their remote origins are in the nationes of the medieval universities— student guilds organized according to place of birth (natio). Some elements of the ceremonial of modern Studentenverbindungen are taken from the medieval (and ultimately monastic) ceremonial of medieval university. But the proximate origins of modern Studentenverbindungen are in the Burschenschaften of the 19th century. These adopted some of the older traditions of student life, but were dedicated to the idea of German unification, and infected liberal ideology. They wore quasi-military uniforms (on the grounds that medieval students had had the privilege of bearing arms), and engaged in a form of ritualized sword-fighting, the so-called Mensur.

During the Kulturkampf Catholic students responded by founding their own Catholic Studentenverbindungen devoted to combating liberal ideology, and promoting the political and social teaching of the Church. These were organized in the so-called Cartellverband (CV), which still exists today, and which was one of many exemplary Catholic organizations founded at the time, such as the Zentrumspartei.

As one can well imagine, there was originally a great deal of conflict between the CV and Burschenschaften. Beside the general differences in political orientation there were a number of more particular points. For example, the CV rejected (and indeed continues to reject) Mensur. As P.J. Smith recently noted, this was because Catholic theologians considered Mensur to fall under the general prohibition of dueling and even more generally under the fifth commandment. The Burschenschaften saw this as symbolizing the craven and un-manly character of the CV, seeing it as bowing to the dictates of pussy-footed Italians, and losing the genuine German spirit, as not being worthy to carry swords or wear uniforms (since the seemed unwilling to use them), and of being a threat to true academic life and freedom. The CV for its part defended itself as being more truly humane, as defending the true freedom that comes from conformity to right reason, and as wearing uniforms and bearing swords to symbolize its devotion to Christ the King, and its willingness to defend the Church— ideals well expressed in the last stanza of the current anthem of the Austrian Cartellverband (ÖCV):

[Rough translation: Thou standest on the strong foundation of the Faith, Cartellverband, well united at every hour, faithful to God and fatherland, for the glory of our Austria whatever the times might bring, and, Lord, see us ever ready to do battle for the protection of the altars.]

For some years I have been a member of KAV Sanctottensis in Heiligenkreuz, a member of the Austrian Cartellverband (ÖCV), which separated from the German CV in the 1930s. I have enjoyed it immensely. It takes what is best about student conviviality, and makes it even better.

The Sanctottensis organizes many different sorts of events throughout the year— some only for members, others where guests too are welcome. All of them are meant to promote the four principles of the CV: religio, patria, scientia, and amicitia. There are processions and Masses, academic lectures, political discussions, poetry readings, croquet matches, and especially there are the elaborate ceremonies of the Kneipe and the Commers.

The Sanctottensis, being based in Heiligenkreuz, consists mainly of theology students, and is thus particularly suited to bringing solid theological thought into the wider ÖCV. Membership in a Studentenverbindung is life-long, and so the ÖCV is a an organization with something of the character of the Knights of Columbus in U.S.A. (not to mention certain fraternal organizations active during the Enlightenment…), engaging in charitable and political action.

Of course, like all Catholic organizations in Austria, it has not been free of some of the controversies between “conservative,” and “progressive” factions, but on the whole I have found that a lot interest in the actual teachings of the Church—including her social teaching. I was very pleased, for example, that the excellent pro-life politician (and former student of my father’s) Gudrun Kugler gave a speech at the last Cartellversammlung of the ÖCV that was very well received. I think that the contempt with which much of mainstream German and Austrian culture regards Studentenverbindungen (probably due to the quasi-military uniforms, and what Notburga calls ‘GNT,’ [German National Trauma]), leads to the Catholic ones having a better understanding of the opposition between Christianity and the world than many Austrian Catholic organizations.

About a year ago, when Anthony Esolen suggested that the Catholic Church in America in the last forty years has done practically nothing for young men, Clare Coffey replied with the following immortal tweet:

@PeterBlairAI @kev_jg @bdmcclay What has Church done for men? Besides offering them God's saving mercy in the sacraments and other lady shit

To some degree, of course, Coffey is quite right. Nevertheless, Esolen could reply that the Church has always tried to engage certain ‘categories’ of persons, including categories defined by age and sex. Thus the First Epistle of St John:

In German there is one of those nice compound words for the pastoral care of such groups: Kategorialseelsorge. The sort of thing that Esolen had in mind he explained in a later article— inter alia getting men together in groups to read ‘manly’ books, kneel on the floor, and sing militaristic hymns.

Of course, Coffey’s annoyance with Esolen, probably had less to do with a categorical rejection of the idea of Kategorialseelsorge than with her different assessment of the effects of feminism, and of the extent to which feminism rests on legitimate grievances. That’s a difficult question. In any case, however, I think that the Catholic Studentenverbindungen of the CV and ÖCV give positive examples of the sort of thing that Esolen wants. Moreover, the length of their traditions, and the culture 19th century German Catholics, ensure that they are not in as bad taste as certain embarrassing recent initiatives in American Catholicism.