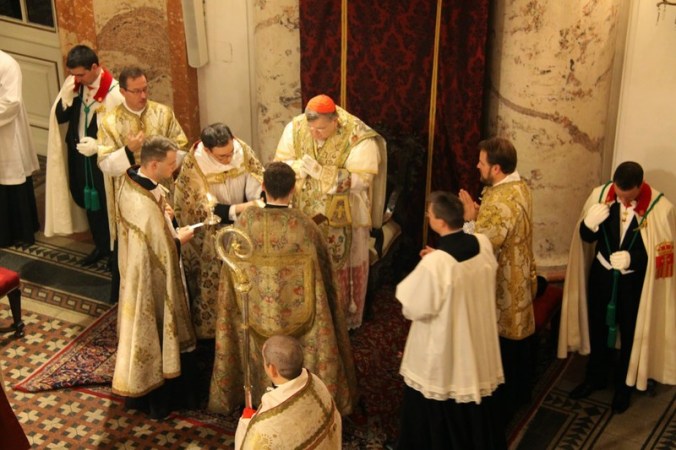 Pontifical High Mass at the Throne in the Usus Antiquior

Peter Kwasniewski has a wonderful post up at The New Liturgical Movement defending the liturgy as ‘Court Ritual’. He argues that especially in our democratic times it is necessary to emphasize that the Sacred Liturgy is a the court ritual of Christ the King as well as the oblation of Christ the Priest:

Monarchy or princedom, the oldest and arguably the most natural form of political organization, has been a far more consistent part of the human experience and of the formation of Christian culture than the democratic/egalitarian ideology of “self-evident truths” of which we have persuaded ourselves in modernity. Regardless of whether we think democracy can be made to work or not, in the realm of supernatural mysteries, Christianity is purely and entirely monarchical. Against the backdrop of the Old Testament revelation of God as the (one and only) great King over all the earth, and of the people of Israel as a kingly, priestly people ruled by prophets, judges, and ultimately the Davidic dynasty, we profess that Christ is our King, the Lord of heaven and earth, of all times, past, present, and to come, of this world and of the next; that His angels and saints are His royal court; that He deigns to call us His friends and brethren, yes, but such that we know that we never cease to be His servants. We long for His courts and tabernacles. The thick “politicism” of the imagery points to the real, sovereign polity of the Mystical Body, subsisting in the Roman Catholic Church as a societas perfecta and altogether perfected in the heavenly Jerusalem, the city of the great King. Our ecclesial sacrifice, the Most Holy Eucharist, is a kingly and high-priestly oblation.

Consequently, the modern fixation on democracy, as if it were the best or the only good form of government, not only does not abolish our need for the language of kingship and courtliness, but makes it far more needed than ever before, in order to impress on our minds the way things really stand in the definitive reality of the kingdom of God. All of our democratic and egalitarian experiments will fall away at the end of time, as the glorious reign of Christ the King is revealed to all the nations, and those who have submitted to His gentle yoke will be raised to eternal life in glorified flesh while those who have rejected Him will wail and gnash their teeth, condemned to eternal fire in unending torment. The liturgy should reflect the truth of God — His absolute monarchy, His paternal rule, His hierarchical court in the unspeakable splendor of the heavenly Jerusalem — and not the passing truths of our modern provisional political organizations, or, in other words, that continual redesign of the liturgy, in language and ceremonies and ministers, for which the noveltymongers are agitating.

Many years ago, in my undergraduate thesis, I made a similar point (though with much less eloquence):

5 thoughts on “Liturgy as Court Ritual”