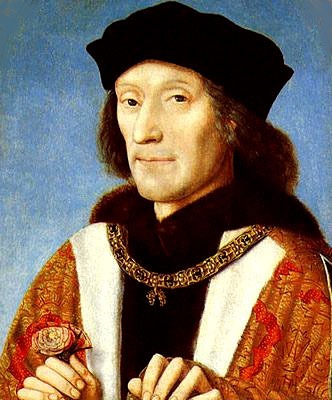 In England the disintegration of the medieval order coincided with the rise of the house of Tudor. In fact, already Henry VII (1457 – 1509), the founder of the Tudor dynasty, made certain key decisions which were to erode the medieval way of life and the world view of Christendom. When he came to power in 1485 England was weakened both by the hundred years war with France (1337 – 1453) and the Wars of the Roses (1455 – 1485), a civil war which decimated the English nobility. The effects of these two wars gave Henry the opportunity to begin the remolding of England along new lines. By the peace of Etaples (1492) Henry VII gave up English claims to French territories , a key step in the development of English nationalism. Removed from the continent the English could less and less conceive of themselves as part of the higher unity of “Christendom.”

The weakening of the English nobility through the Wars of the Roses enabled Henry to strengthen the monarchy, thus ending the hierarchy of subsidiary feudal authorities, and leading English subjects to see themselves primarily as members of the English nation. At the same time it led to the an increase in the power of the mercantile class, with which Henry allied himself. The Intercursus Magnus (given its effects, the Flemish name Malus Intercursus seems more apposite) led to an explosion of the wool trade that was to be a driving force behind the fundamental changes represented by the agricultural and industrial revolutions. The wool trade led to enclosure which destroyed the medieval economy (which Phillip Blond calls the “Catholic Economy”). It led to the primacy of the kind of dehumanized contractual/mechanical economic relations that are typical of capitalism.