In the Vienna Woods near Stift Heiligenkreuz is the Carmel of Mayerling. Mayerling was the sight of the hunting lodge in which Archduke Rudolf of Austria, only son of the Emperor Franz Josef, died in tragic circumstances on January 30th, 1889. The Emperor gave the lodge to the Carmelites, and had it re-modeled into a convent with a beautiful little neo-gothic church, with the high-altar at about the spot where the Archdukes bedroom had been.

Today the Carmel Mayerling has an exemplary observance, and several novices. Nor do they neglect the duty of praying for the poor Archduke. On January 30th, 125 years after the tragedy, there was a solemn requiem in the convent church celebrated by the Abbot of Heiligenkreuz. Here are some photos:

The guest-house of the Carmel in Mayerling is used to house a group of students of the Theological Faculty (Hochschule) in Heiligenkreuz. On January 22nd the Archbishop of Vienna, Christoph Cardinal Schönborn came to Mayerling to visit both the nuns and the students. January 22nd is the Cardinal’s birthday, so it was a rather celebratory visit. He met with the nuns first (as a cardinal of the Holy Roman Church he was allowed into the enclosure), and then celebrating Mass, preaching a rather moving sermon on hardness of heart. Here are some pictures of the Mass:

After Mass he ate supper with the students:

Today, His Eminence Christoph Cardinal Schönborn, Archbishop of Vienna ordained my confrères Pater Kilian and Pater Johannes Paul to the diaconate and the priesthood respectively. Please say a prayer for them. Here are some pictures from PKW and http://www.stift-heiligenkreuz.org/:

The laying on of hands

The laying on of hands

P. Johannes Paul thanks the Cardinal after Mass

In his sermon for the Chrism Mass in Vienna, embedded above, Cardinal Schönborn refers to the wooden sculptures by Giovani Giuliani in the Hall of the Mandatum in Heiligenkreuz (at the 7.03 mark):

In Stift Heiligenkreuz, in the cloister, there are two groups of figures that clearly refer to each other: the anointing in Bethany and the washing of the feet at the Last Supper. Obviously the sculptor saw a relation between the two.

He then explains the connection through a reflection on the first days of the pontificate of Pope Francis. 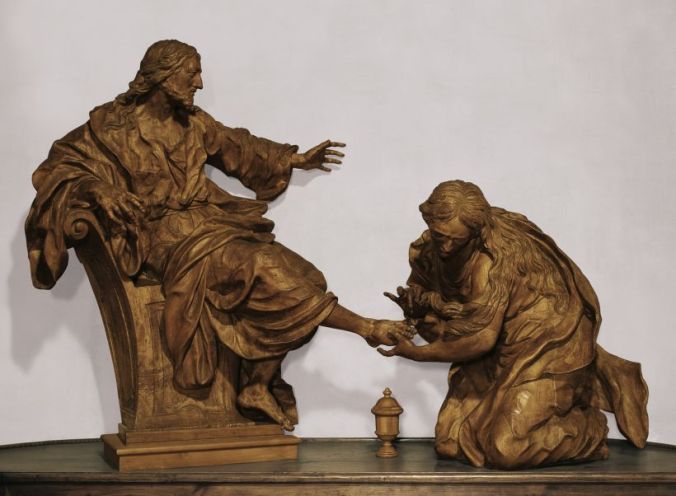 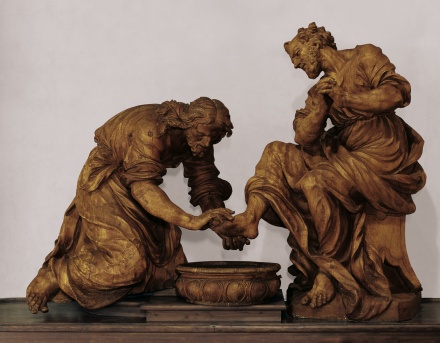 When Bl. Pope John Paul II died in 2005 I was a junior at Thomas Aquinas College in California. I remember praying the rosary during his final hours — we all had tears in our eyes, but it was a peaceful sadness. I thoroughly enjoyed the days that followed; praying a lot of course, but also watching the novemdiales on EWTN, reading Universi Dominici Gregis over and over, and speculating about who the next Pope would be. I envied my younger brother a bit who spent the whole period of the vacancy of the Apostolic See in Rome, but I enjoyed holding forth on things to people who knew less about the Cardinals. I remember telling one of my classmates that I thought the next Pope would be a disciple of Cardinal Ratzinger’s: Scola or Schönborn or even Ouellet. She asked me “What about Ratzinger himself?” I said that that would be wonderful, that I loved Cardinal Ratzinger, that I thought everything he wrote ought to be inscribed on tablets of gold, but that I didn’t think it would happen.

A few days later, as I came out of class, people were saying that white smoke had gone up. We all crowded into the chaplain’s house, which had the only TV on campus, and waited. Then Cardinal Medina-Estevez  appeared on the street and greeted us in as many languages as he could think of, and then began to make the announcement as s l o w l y as possible. As soon as he said “Josephum” we started shouting YES!!YES!! We already knew who it was before he went any further… It was almost too good to be true.

Sermon of Archbishop Christoph Cardinal Schönborn at the Chrism Mass

[Introductory note: the following sermon is only intelligible in the light of a recent decision of the Cardinal’s to allow a man living in sin with another man to serve on a parish council in Stützenhofen, which has caused great consternation. I admire Cardinal Schönborn greatly. He is a wonderful teacher of the Faith and a pastor filled with zeal for souls, who has done much good for the Church in Austria, and indeed the whole world. But sometimes he does things that simply make no sense at all. In the following sermon, preached at the Chrism Mass on Monday, he tried to address the concerns of many priests about the  Stützenhofen decision. I shall post some reflections on the sermon after Easter. For now I shall only say that I think the sermon makes many good points, but that the part that tries to explain the Stützenhofen decision doesn’t make sense. I have translated from the prepared text, which differs slightly from the sermon as recorded in the video embedded above.]

Dear Brothers in the Priestly Ministry,

Yesterday I was in Vienna for the funeral of His Imperial and Royal Highness, Archduke Otto of Austria, Royal Prince of Hungary etc., eldest son and rightful heir of Bl. Charles of Austria, the last Emperor of Austria and Apostolic King of Hungary. 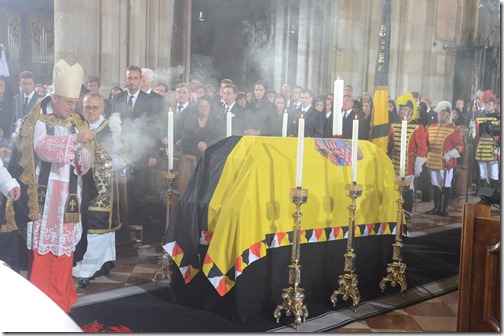 One of the the most striking things about the solemn and elaborate ceremony was how joyful it was. From whence came that joy? What could be more calculated to plunge us once again into all the piled-up sadness of the 20th century – that most ruinous of all periods in the history of Central Europe – than the funeral of the head of the House of Austria who lived through practically all of it? Otto von Habsburg was still a child when the the World War shattered the “clay pot” of Austria-Hungary into dozens of unstable fragments, but he was then quite an active behind-the-scenes player in the following decades which saw the Anschluss, the Second World War, the establishment of Marxist dictatorships in almost all of the former crown lands, and the astonishing spiritual and moral decline of the West. END_OF_DOCUMENT_TOKEN_TO_BE_REPLACED 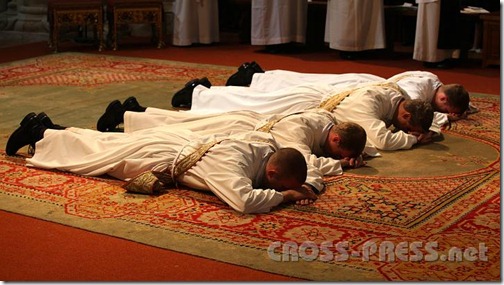 On Trinity Sunday three of my confreres and I were ordained to the Priesthood by Cardinal Schönborn. Photos can be seen here.

The following is a reconstruction and translation of the words of thanks which I said on behalf of all four of us at the end of Mass: END_OF_DOCUMENT_TOKEN_TO_BE_REPLACED