In Heiligenkreuz we celebrate the Feast of the Exaltation of the Cross twice every year. On the Feast itself we have a monastic celebration, in which practically only the community itself takes part. On the Sunday following there is a more exoteric celebration to which lots of pilgrims come, with a solemn procession in the afternoon with our relic of the True Cross. Among the pilgrims on “Kreuzerhöhungssonntag” are always a group of ladies from the so-called “Sternkreuzorden” (Order of the the Starry Cross). The Sternkreuzorden comes in the morning and listens to some spiritual conferences (i.e. talks), before taking part in the celebrations of the afternoon. As I have been asked to give the conferences this year, I have done a little research on what the Sternkreuzorden is. The secretariat of the Order sent me a summary of its history and the latest version of its statutes, and I have also checked a few reference works. Here is what I have discovered.

The Sternkreuzorden is what is called in German a “Damenorden,” that is a chivalric order for ladies. In his rather curious book The Orders of Knighthood, British and Foreign, Rajah Sir Sourindro Mohun Tagore (ah, British India…) describes its founding as follows:

The Imperial House of Austria is said to have been in possession of a small piece of the Cross of Christ. The Emperors Maximilian and Ferdinand were accustomed to bear with them constantly in war and peace this relic inserted in a Cross of Gold. After the death of Ferdinand, his successor Leopold, presented it to the widowed Empress Eleanora, a daughter of Duke Charles of Mantua in order by its means to soften the sorrows of Her widowhood. She kept it very carefully locked in a small box, adorned with crystal and enamel and covered with silk. It happened that in the night of the 2nd February 1668, a fire suddenly broke out in the Imperial Castle at Vienna, just below the apartments of the Empress Eleanora, and it soon reached the Imperial apartments, from which she escaped with considerable difficulty before they were entirely consumed. On the following day search was made for the relic, and it was discovered amongst the ruins, fortunately untouched by the conflagration, with the exception of the metal The Empress was so rejoiced at the incident, that She ordered a solemn procession, and resolved to found a Female Order, not only, as the Statutes say, to commemorate the miraculous events but also to induce the Members to devote themselves to the service and worship of the Holy Cross, and lead a virtuous life in the exercise of religion and works of charity.

The relic in question is now kept in the Schatzkammer in Vienna. According to the Kurzgeschichte sent me by the Order, the empress had canonical court examine the preservation of the relic, and it came to the conclusion that the preservation of the wood, while the metal casing melted was miraculous. The Order’s statutes were approved by Pope Clement IX in the Bull Redemptoris et Domini Nostri (August 2, 1668). 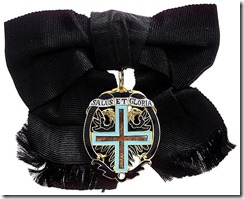 The badge, [Rajah Sir Sourindro writes] which has undergone four alterations since the time of Maria Theresa, is an oval medallion, with a broad blue enamelled border, inclosing a black enamelled Eagle with two heads, and claws, both of gold, on which lies a Gold Cross, enamelled green, and bordered with brown wood. Over this, on an intwined wreath in black letters, on a white ground, is the motto of the Order, “Salus et Gloria”— (Hail and glory.) It is worn, pendent to a strip of black riband, on the left breast.

Originally members of the order had to prove sixteen noble great-great-grand parents (and if they were married they had to prove the same for their husbands), but the current statutes (approved by the Archbishop of Vienna in 2007) only stipulate that the members be Catholics and not living in invalid marriages, though in the first article it does say that the order is a association of “hochadelige Damen,” that is, they have to be duchesses, princesses or countesses. 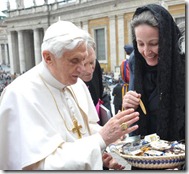 The members are appointed by the guardian, who is always a member of the House of Austria. Since the death of Princess Regina the guardian has been  Archduchess Gabriela. Her Imperial and Royal Highness recently gave an interview to the Tagespost in which she says the following about the Order:

At the centre of the order is the orientation toward the cross of Christ. We also support some great works of mercy, for example in Albania, but the most important [part of our mission] is the contemplative [part].

Sunday, being the long-awaited day of Card. Newman’s beatification, I shall be using two of Newman’s sermons for my conferences: Order, the Witness and Instrument of Unityand Omnipotence in Bonds, I shall use them, and the beggining of S. Ignatius’s Excercises to talk about the epistle of the Exaltation (Phil 2:6-11), but more on that later.