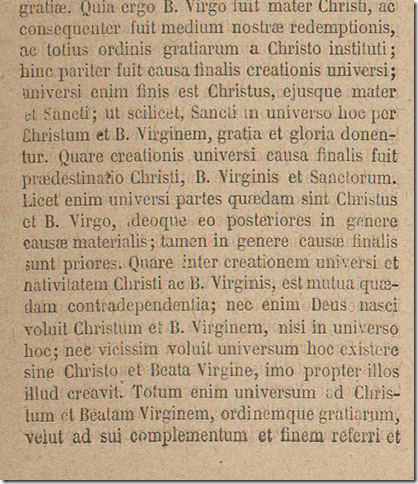 WordPress automatically linked my last post to a post in which a Greek Orthodox blogger (Perry Robinson) argues, in typical Orthodox fashion, that the Son would have become incarnate even if the Fall had never occurred. Following S. Maximus Confesor, the Robinson, argues that God willed the Incarnation “at all times”, and that the Fall rather than being the reason for the Incarnation, is Lucifer’s envious attempt to frustrate it:

Since God eternally wills his incarnation, to prevent its occurrence would be to frustrate the divine will and demonstrate the devil’s superiority. So the temptation and the Fall are a response to the Incarnation.

Robinson sees the advantage of this in that it gives God a less reactive role: “Looking at the Incarnation this way puts God back in the driver’s seat.” But this a rather superficial way of looking at things. He seems to be envisioning the two possibilities as follows:

2. (Robinson’s own position:) God was always planning to become Incarnate. The devil tried to prevent the Incarnation, and (when it had happened) to end it by bringing about the the death of Our Lord, but God foiled the demonic plans with the Resurrection.

Now, it seems to me that both of these positions make God too reactive. What Robinson doesn’t seem to get is that God’s will is totally uncaused: His will is the reason why we do things not the other way around. God wills everything by one single act of will, the principle of object of which is His own goodness. Nevertheless, as S. Thomas, teaches in that single act of will He wills that some things be means to others:

Thus, it is of course true that God “at all times” willed the Incarnation, but at the same time it is true that He at all times willed it as the the remedy to sin. Robinson quotes a text from S. Thomas in which he seems to be holding position 1.:

“Hence, since everywhere in the Sacred Scripture the sin of the first man is assigned as the reason of Incarnation, it is more in accordance with this to say that the work of Incarnation was ordained by God as a remedy for sin; so that, had sin not existed, Incarnation would not have been.” (STh IIIa, q. 1, art. 3, c)

But if one reads what S. Thomas says in context it is clear that he is not saying that God’s will is posterior to the Fall:

For such things as spring from God’s will, and beyond the creature’s due, can be made known to us only through being revealed in the Sacred Scripture, in which the Divine Will is made known to us. Hence, since everywhere in the Sacred Scripture the sin of the first man is assigned as the reason of Incarnation, it is more in accordance with this to say that the work of Incarnation was ordained by God as a remedy for sin; so that, had sin not existed, Incarnation would not have been. And yet the power of God is not limited to this; even had sin not existed, God could have become incarnate.

In other words, God’s willing the Incarnation does not have any created cause, but it has been revealed that it was in fact eternally willed as the remedy of sin. Thus for S. Thomas the Incarnation is not a “reaction” to sin in the way in which Robinson understands it. God could, after all, have prevented sin from happening at all. The Orthodox don’t seem to hold this — perhaps because they never went through the Pelagian controversies that the West went through, and thus never got the clarity about the relation of predestination to free will that Augustine brought. In the very article that Robinson quotes, S. Thomas brings up an objection from predestination:

The objector is assuming as a principle that God willed “from all time” to become incarnate, and S. Thomas’s reply does not contradict the principle:

Predestination presupposes the foreknowledge of future things; and hence, as God predestines the salvation of anyone to be brought about by the prayers of others, so also He predestined the work of Incarnation to be the remedy of human sin.

The comparison to prayer is interesting: prayer is for the sake of salvation and not the other way around, thus one could say (as I suggested in the foregoing post) that sin is more “for the sake of” the Incarnation than the other way around. Properly speaking, of course, sin is not willed by God for the sake of anything; it isn’t an object of His will at all because it is a kind of non-being, a privation of some due good. Nevertheless God is able to prevent all sin and doesn’t. The pop-theological reason for this that He “respects our freedom” or something, but that is not at all the answer that S. Thomas gives:

It is otherwise with one who has care of a particular thing, and one whose providence is universal, because a particular provider excludes all defects from what is subject to his care as far as he can; whereas, one who provides universally allows some little defect to remain, lest the good of the whole should be hindered. Hence, corruption and defects in natural things are said to be contrary to some particular nature; yet they are in keeping with the plan of universal nature; inasmuch as the defect in one thing yields to the good of another, or even to the universal good: for the corruption of one is the generation of another, and through this it is that a species is kept in existence. Since God, then, provides universally for all being, it belongs to His providence to permit certain defects in particular effects, that the perfect good of the universe may not be hindered, for if all evil were prevented, much good would be absent from the universe. A lion would cease to live, if there were no slaying of animals; and there would be no patience of martyrs if there were no tyrannical persecution. Thus Augustine says (Enchiridion 2): “Almighty God would in no wise permit evil to exist in His works, unless He were so almighty and so good as to produce good even from evil.” (STh Ia, q. 22, a. 2, ad 2)

Everything that God wills in creatures is for the sake of the merciful manifestation of His glory, and by far the greatest of these works is the Incarnation. There is a wonderful text on this in Cornelius a Lapide’s Commentary on Ecclesiasticus (quoted by De Koninck in Ego Sapientia). A Lapide is talking about how Our Lady can be said to be the final cause of the universe:

Everything that is, is willed for the sake of Christ and His Blessed Mother. Even the evil of sin, while it is not itself willed, is permitted for the sake of the mercy and glory manifested in the Incarnation, life, death, and Resurrection of the Lord.

2 thoughts on “Elaboration on the Foregoing: the Predestination of Christ and Our Lady as the Final Cause of Everything”