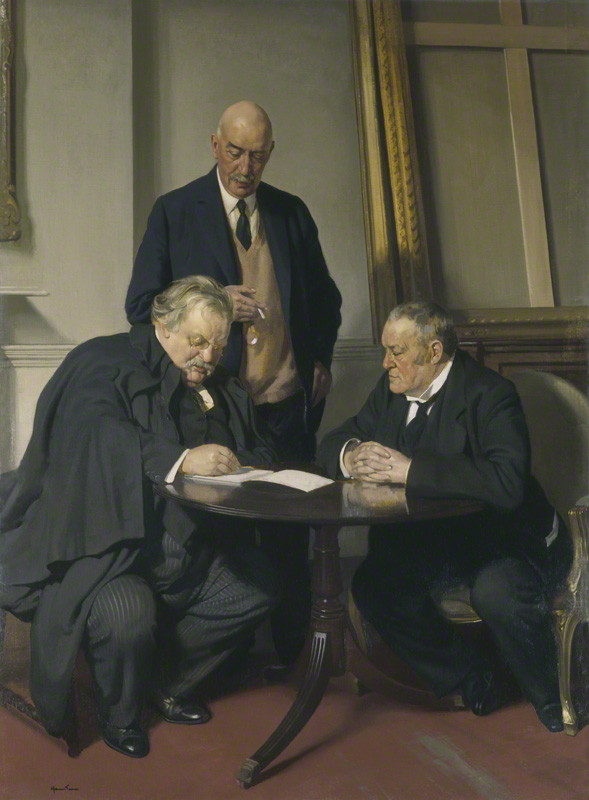 Over-Bearing: Few things shows how far the world has sunken since our time more clearly than an American college lecturer reflecting on his students difficulty in reading children’s books [he reads aloud from  John Senior’s The Restoration of Christian Culture]:

In my own direct experience teaching literature at universities, I have found a large plurality of students who find, say, Treasure Island what they call “hard reading,” which means too difﬁcult to enjoy with anything approaching their delight in Star Wars or electronic games.

Has it indeed come to this? That the descendants of the peoples of Christendom— of the peoples who built the great cathedrals, who conquered and instructed worlds— that the descendants of such peoples should have fallen so low that they cannot even enjoy Mr. Stevenson’s simple adventure stories.  No one could accuse me of being overly optimistic about the effects of the death of Christian civilization, but even I did not expect man to fall so far below the beasts that his keenest enjoyment would be found in Star Wars. Star Wars! That dismal mush of pantheism, gnosticism, and sentimentality, so illogical that in our day a child of five years would have laughed it to scorn.

Past-Bearing: You are quite wrong to see in the popularity of Star Wars a sign of how far our race has fallen since the end of civilization. On the contrary— Star Wars is proof that how ever far the world has fallen, human nature cannot be entirely corrupted, and that despite the reigning dogma’s of anti-culture, the common man can still tell the difference between good and evil, and delights in stories about the triumph of the one over the other. The miracle of Star Wars is that it shows a world of machines and space-ships in which the most important thing is mystery of the good; the magic of an “ancient religion.” In the figure of Luke Skywalker the inhabitants of the dreary wasteland of a world dis-enchanted by godlessness and capitalism, can see themselves discovering that after all the world is a mighty battle field between super-natural powers. Star Wars is not art, but it is something much more important: it is story about the truth of our magical world. It is to these sad times, what penny dreadfuls were to ours.

Over-Bearing: Nonsense. Star Wars is not a story told by the simple for their own amusement. It is a powerful propaganda weapon made at great expense by Californian plutocrats, members of the world wide conspiracy of anti-Catholics and usurers. It was made to confuse the notions of good and evil, and muddle the minds of the world’s children.

Past-Bearing: My dear Over-Bearing, the truth is quite the opposite of what you say. It is precisely the proud intellectuals of the new anti-culture who decry Star Wars for being “puerile” and lacking “subtlety” in its depiction of good and evil— that is, for not mixing them up enough— for making the good good and the evil evil. Hence children spontaneously love Star Wars. It is the relativists and soft-Nietzscheans, and Picasso lovers who decry it as the end of culture.

Over-Bearing: That man may be an ass, who considers Picasso an artist, but he is quite right that Star Wars is mindless distraction that is passively consumed, destroying rather than nourishing the imagination. You yourself has magnificently shown that real fairy tales are quite reasonable, and make perfect sense. But Star Wars makes no sense at all; it is full of the most illogical stupidity. Not to mention the gnostic dualism.

Past-Bearing: It is true that some of the more tiresome characters talk solemn nonsense of a gnostic sort. But the portrayal of good and evil in action is entirely Christian, and even entirely Catholic. Evil is exaggeratedly great appearance, but weak in substance— a shadowy privation of being. Hence many of the apparent absurdities and impossibilities show themselves to be entirely logical. That the Storm Troopers are so feared, and yet are all such comically bad shots. That the evil empire is so powerful, and yet so easy to destroy. When Luke walks unarmed into the the stronghold of the enemy at the end of Return of the Jedi, he shows us again the greatest story ever told: the story of the weakness of the good proving itself stronger than the strength of evil.

Over-Bearing: Past-Bearing, you are indeed past all bearing. You cannot be comparing that spoiled, whining whelp, Luke Skywalker, to our Savior?

Past-Bearing: The tone of Skywalker’s voice might not be the most euphonious, but it is necessary in order that American teenagers might see him as being of their kind. As the theologians say: quod non est assumptum non est sanatum.

[Baring, who has been listening in interest all the while, while pretending to write a triolet, lays down his pen].

Baring: Your defense of Star Wars is all very well, Past-Bearing, but surely it doesn’t apply to The Force Awakens. The original trilogy (despite its vulgarity and sentimentality) had a certain inventiveness, an innocent delight in the revealing of new-worlds. To see the old Star Wars was to walk through an enchanted door and to see again, as though half remembered, the light upon the enchanted world of childhood. But the new film is dull affair made by a committee of capitalists. A tent-pole film so anxious to please the admirers of the original that it repeats almost frame for frame the plot of A New Hope. So anxious not to be boring, that it rushes along at a frantic pace without time for enjoyment. A film so pedantically obsessed with the politically correct opinions that the heroine becomes a sort of feminist Mary Sue, for whom everything is so easy that nothing matters. Force Awakens is the very paragon of  unimaginative and decadent art.

Past-Bearing: Oh, but repetition is the very essence of the age-old story of good and evil. And typology is the genius of The Force Awakens. Surely decadent art is obsessed with novelty? Nostalgia is the mark of truly human stories: Virgil is nostalgic, Dante is nostalgic [cf. the conclusion of this post].  And as to Rey: I find no fault with her role in the story. Does she not show us that great, triumphant, and eternally exciting truth: that one good girl is more powerful than a great many bad men in masks? That the goodness of a little girl is fair as the sun, clear as the moon, terrible as an army with banners?

Past-Bearing [gets up with alacrity]: Yes, do let’s

2 thoughts on “A Dialogue on Star Wars”